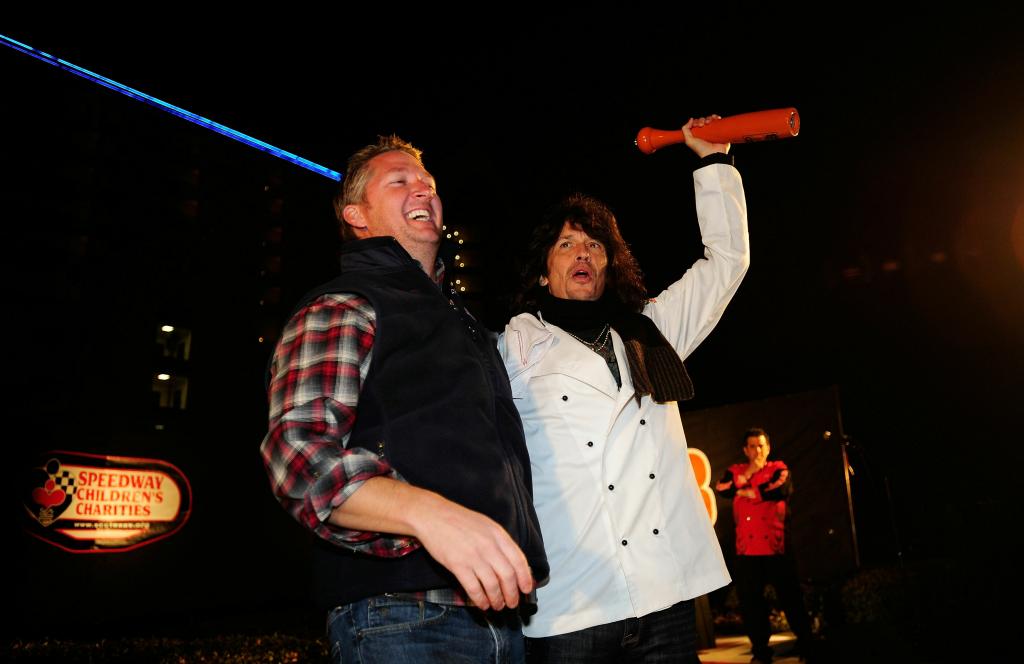 By Annie Quigley
Posted July 07, 2016
And when he orders room service, he tries to channel Jack Nicholson.

When Foreigner lead singer Kelly Hansen isnt performing, hes mastering the art of soufflé and perfecting the five mother sauces. Food & Wine caught up with the frontman to chat about his recent win on Chopped: Rock Stars, what hes learned about steak from Guy Fieri and what the Foreigner guys will be eating on the bus during their fortieth anniversary tour this year.

So the very first thing I need to know is: Did you buy that $46 block of cheddar on your Instagram?
No, I did not. I even responded later on in the comments that I didnt buy the cheese. Although, the only reason I didnt is because I wasnt going home. So Id have to be trying to carry around cheese. Cause I definitely wanted to try it. I was reading this article about a 50-year-old cheese that was accidentally and serendipitously preserved in the back of a refrigerator in a cheese company that this mans father had owned for many decades. And somehow when he was cleaning out, he found this cheese that had somehow survived in just the right climate. And they were auctioning this thing off for hundreds of dollars an ounce.

I'm curious what hundreds of dollars worth of aged cheddar would taste like.
Well, if I buy some I will make sure you get some. And Id like to find out what could you use it with. I mean, could you cook with it or do you just have to kind of eat it on its own or with a cracker or something? It intrigues me.

Youre incredibly into food. What was the moment when you got hooked on it?
I didnt have a very sophisticated, foodie upbringing. My mother was from Irelandshe came to America when she was 18and she made some things extremely well. Still to this day Ive never had a better rhubarb pie. Or a pot roast. But her idea of making a taco was just browning some hamburger and putting it in a taco shell with lettuce, tomato, cheddar cheese, and ketchup. It took a long time for me to get past some of these things that I thought everybody did. Like my mother would put sugar on slices of tomato and eat it like that. And she always put jam on her grilled cheese sandwich, which everyone thought was weird, but I said its kind of like a cheese Danish or something. But I think I learned a long time agoa long time agothat if you could cook for a gal, that that was a good thing.

Did cooking for dates work out well for you?
One of the funniest things that ever happened to me was, I was living in an apartment and I was cooking for this gal and I think I was pounding some chicken or something to make some kind of breaded chickenI dont know what it was. So I'm sitting there with the meat tenderizer and just pounding this chicken and I had these Eastern European neighbors upstairs who thought I was very odd, a long haired rock n roll guy. And so I get a ring at the door and they were both standing there quite concerned in their bathrobes and theyre going, Whats going on? Whats going on down here?  And I just looked at him and I said, Well, I'm just beating my meat.

Do you still cook a lot at home, or are you on the road so much that youre never in your own kitchen?
I am the road a lot. But if I'm home for at least three to four days to a week then I can justify going shopping. I was doing soufflés a little while ago, just trying to get my head around that, and working on those five sauces and slowly just trying to improve my repertoire. And its fun for me. I like to take my time doing it. Its very relaxing and cathartic.

What are you listening to while youre cooking?
Usually I put on some old R&B or classical or some combo jazz. I dont want something that I have to analyze or think too much about, and sometimes if its something super contemporary then I spend too much time thinking about the music rather than thinking about what I'm doing with my knife. You need to have focus.

Is it true youre good friends with Mario Batali and Guy Fieri?
We are friends. I met them back, I think it was in 09. We were doing a cooking competition for charity at Texas Motor Speedway. And so I met Tim Love and Guy and Mario there. We spent a crazy three days in the infields during a holiday weekend where every day is a different kind of class of racing; stock cars and trucks and spring cup racing. There were a couple of buses set up in the infield with a space in between them where Mario had several of his pizza ovens set up, and they were making food all the time. At night everyone would converge on this camp and wed drink wine out of a box and smoke cigarettes and eat. Those guys do know how to have fun.

What have you learned from your chef friends, besides how to have a good time?
Mario is such a giving, generous, great personality. He always seems to be enjoying every minute of what hes doing and I really envy that. I already loved Italian food but watching him and listening to him Ive even moved into more of a fresh type of Italian cooking for myself. But he also has lots of little tips that everybody already knows, but I didnt knowlike you put a wooden spoon on top of a boiling pot of pasta so that it breaks surface tension and doesnt boil over.

And Id never cooked a whole tenderloin until Guy Fieri told me just put salt and pepper on it; dont do anything else. Just put a heavy dose of salt and pepper on it, pat it in there so it doesnt fall off, and I swear to God its the best steak. My dad just couldnt believe it. His mind was blown. And, you know, I have learned from these guys that many times the simplest thing is the best thing. Really great ingredients are really important.

I know youre very health-conscious and conscious about where your food comes from. How do you handle that on the road?
With room service, I do the old Jack Nicholson Five Easy Pieces style of ordering. Like if I want some kind of grilled breast of chicken and they dont offer it up that way, then I have to order a chicken sandwich but put everything on the side and give me a side order of dry wheat toast with no butter. You have to say that because if you go to the south or some place, theyll just butter that baby up for ya. Then Ill assemble my own thing when it comes. But the one thing I try to do is leave myself open once or twice a week when we have an off day and I will research whatever city were going to, and if I know a chef or two there I can call them.

What are a few amazing places youve discovered on the road?
Since I won on Chopped, Ted Allens been really great at staying in touch with me, so were always talking about different places to try.  I just went to Chris Santoss place in New York, Vandal. I'm on a never-ending hunt in New York City just to try new things. Or Baltimore during a good season for fish or soft shell blue crab, which is unbelievable, just simple, deep fried on white bread with lettuce and tomato and mayonnaise. To me, thats just perfect. The place that I got that was Faidleys Seafood. Its been there 75 years.

Speaking of Chopped, did you have a nemesis ingredient?
I think they were kind of easy on us. I'm used to being at home and sometimes Ill just go: Well, what do I have here? What can I put together? I always try to keep some things on hand when I'm at home. I always try to keep Parmesan cheese or ricotta or tomatoes or arugula. Because then with very little else you can actually make something really good. But on the show, because I really had never worked with it before, it was the confetti eggplant. I dont make a lot of things with eggplant, even though its not a difficult ingredient, but I think I just kind of destroyed it. And I covered it up with some cheese and I put it on an arugula salad and they didnt say anything about it.

Well you clearly did well.
I'm waiting to get the call to do a Champions episode.

Tell me five people that you would invite to a rockstar dinner party.
Well I would invite Ray Charles. Aretha Franklin. Maybe Mick Jagger. Id have to, of course, invite my band so were already over five there. And probably Einstein, just to break up the conversation.

This year is the 40th anniversary of Foreigner, and youre doing a huge tour. What will you and the band be eating and drinking on the tour bus?
We try not to have too much crap on there because well eat it. And so there are no more peanut M&Ms and theres no cookies. But theres granola, theres some stuff to make sandwiches, some avocadoes, some citrus. Its very hard to put too much together on a tour bus because theres not actually a stove. Its really just keeping you going until you get to the next place.