Foreigner and Mick Jones have carved their visage into the Mount Rushmore of rock with some of the biggest hits in music over the past 40 years, solidifying their title as the world’s best-selling band of all time. The luminaries celebrated their 40th anniversary and the release of their brand new Record Store Day exclusive EP “The Flame Still Burns” with an acoustic performance of selections from their legendary catalog for iHeartRadio’s ICONS series presented by Citi MasterPass on November 21st in New York City.

Since entering the studio for their first album in November of 1977, Foreigner has gone on to sell over 80 million records worldwide. The group have become staples of rock, gracing every jukebox and radio with monumental hits like “ Cold As Ice,” “Feels Like The First Time,” and “I Want To Know What Love Is”. Founder and figurehead Mick Jones and vocalist Kelly Hansen sat down with host Jim Kerr of New York’s Q104.3 to reflect on their amazing career before the performance. Hansen joined the band in 2005 and described his relationship with Jones as a “weird symbiosis.” Hansen lauded Jones for his talent and songwriting abilities saying, “When I hear Mick play a G Chord, I know it’s Mick because no one plays a G Chord the same way as Mick does.” He continues: “The way he plucks his guitar, the way he holds his pick, it’s all unique and unusual and it’s the mark of a guy who’s a risk taker, a guy who demands to be different. He’s not about playing a million different notes, he’s about serving the song and he’s about the magical energy that matches the music.” 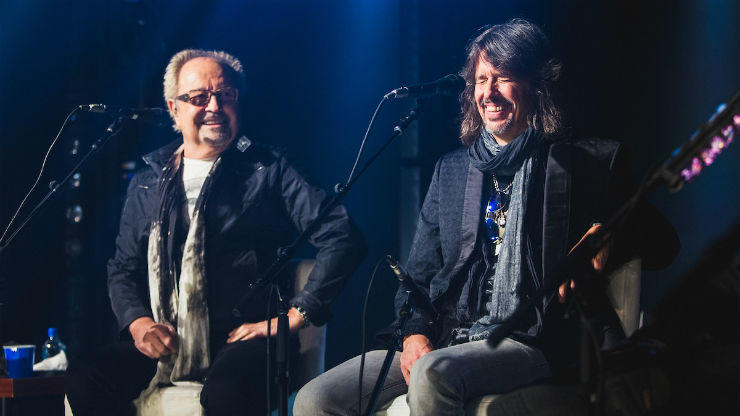 Just coming off an acoustic tour, the band has big plans for the rest of the year and into 2017, starting with the Record Store Day exclusive 10-inch vinyl EP The Flame Still Burns, a celebration of their 40 years as a band.  The group will also tour around the world, record with an orchestra in Sweden, and Mick will release his official biography, which he described as “historical and hysterical.” Mick and Kelly also premiered the video for “The Flame Still Burns,” before the intimate performance.

While opening up with the 1978's “Double Vision,” Hansen told the crowd that the stripped-down versions of these songs, “showcase the skill, ability and prolific nature of this man sitting next to me - Mick Jones. They say when you can play a song on a single instrument like guitar or piano it will reveal all it’s strengths and weaknesses to you.” The group then performed their legendary catalog, including, “Say You Will,” “Waiting For a Girl Like You,” “Dirty White Boy,” “When It Comes To Love,” “Cold As Ice,” “Feels Like The First Time,” “ Jukebox Hero,” and an encore of “Hot Blooded,” and “I Want To Know What Love Is”.

There’s only a handful of artists with so many incredible songwriting credits as Mick Jones and the humble member of the Songwriters Hall of Fame shows no signs of stopping. Catch Foreigner on the road in 2017.