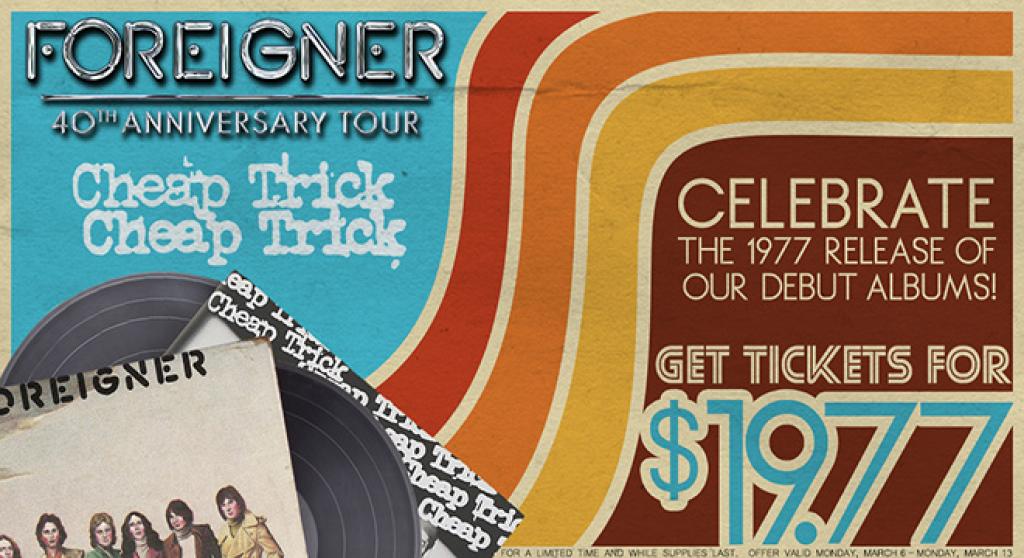 (March 6, 2017) -  The year was 1977. Jimmy Carter was President. Star Wars was #1 at the box office. And Foreigner’s self-titled debut album was sweeping the charts with unprecedented fanfare. Cheap Trick released their first two records this year too, Cheap Trick and In Color, and 1977 went on to be one of the most important years in rock and roll history.

Foreigner, Cheap Trick and special guest Jason Bonham’s Led Zeppelin Experience will launch a mammoth summer tour kicking off in Syracuse, NY on July 11th presented by Live Nation. In honor of these 40th anniversary milestones, for a limited time starting March 6th, $19.77 priced tickets will be available at livenation.com. For some, it will “Feel Like the First Time” you bought a concert ticket at this special price!

“I never could have imagined when I set out to create Foreigner forty years ago, that we’d still be touring around the world and performing the music we love all these years later,” says founding member and lead guitarist Mick Jones. “I can’t express the gratitude I feel when fans share stories of how our songs have been woven into their milestones and memories over the years. This summer we are going to celebrate these songs, and I can’t imagine a better group of friends to share this monumental tour with, than Cheap Trick and Jason Bonham who are sure to make it a true tribute to the everlasting power of rock and roll."

Inducted into the Rock & Roll Hall of Fame in 2016, CHEAP TRICK is undoubtedly one of the most influential classic rock groups of the past 50 years. They have performed over 5,000 shows spanning four decades and have sold 20 million records worldwide. CHEAP TRICK formed in 1974 and while they have evolved throughout the years, the band continues to reach mainstream and critical success. Hits such as "I Want You To Want Me," "Dream Police," and "Surrender" have cemented the group as one of America's top rock 'n' roll bands of all time. In 2016, CHEAP TRICK released its 17th studio collection, Bang Zoom Crazy…Hello.

“I was thrilled to hear Mick Jones wanted me to be involved in celebrating 40 years of Foreigner. I spent 3 years as their drummer and had a great time," says Jason Bonham. "Jason Bonham's Led Zeppelin Experience show will hit home run after home run with these timeless classics done to perfection. JBLZE started 7 years ago as a way to show my appreciation not only to my dad and the music of Led Zeppelin, but also to the fans themselves. With the amazing Cheap Trick along with the one and only Foreigner this is show not to be missed.”

To coincide with the tour, FOREIGNER--Mick Jones (lead guitar), Kelly Hansen (lead vocals), Jeff Pilson (bass, vocals), Tom Gimbel (rhythm guitar, sax, vocals), Michael Bluestein (keyboards), Bruce Watson (guitar) and Chris Frazier (drums)– will be releasing a celebratory 40th anniversary album that features forty FOREIGNER tracks throughout the years entitled 40 – Forty Hits From Forty Years (RHINO). This album is a comprehensive compilation of original hits and several tracks from the current lineup with Kelly Hansen on vocals including “Cant Slow Down,” “Too Late,” and the Top 20 AC hit “When It Comes To Love.” The album also features two new songs, “The Flame Still Burns,” and “Give My Life For Love,” a brand new song by Jones. Rhino kicked off a year-long catalog promotion with the January 24th picture disc release of Head Games.

A limited number of $19.77 tickets will be available for the following stops. Fans can check out livenation.com for complete tour itinerary, tickets and news.

*** Jason Bonham’s Led Zeppelin Experience not on this date