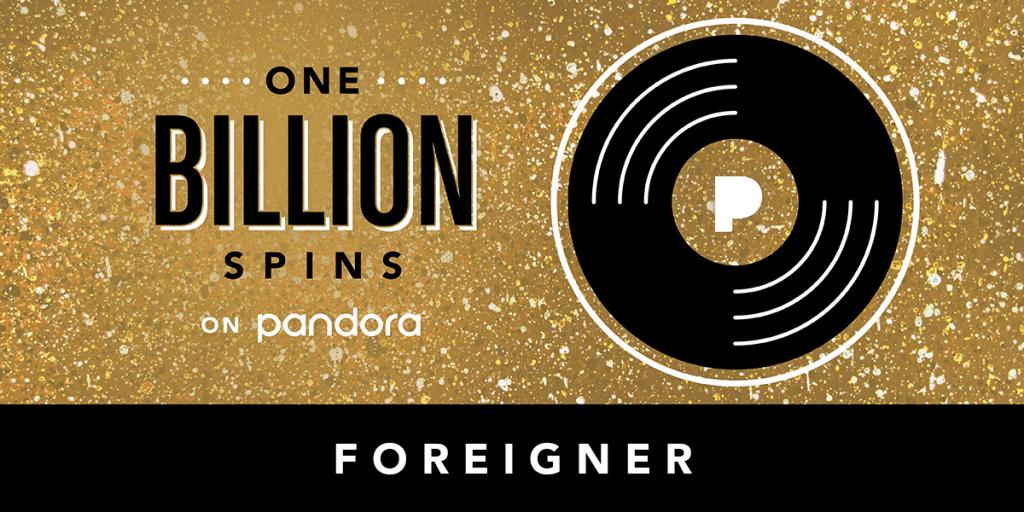 ICONIC ROCK BAND JOINS THE RANKS OF THE WORLDS MOST POPULAR ARTISTS IN THIS MOMENTOUS ACHIEVEMENT, ENJOYING UNPARALLELED POPULARITY IN THE DIGITAL AGE

(April 19, 2017) -- Pandora, one of the top music streaming services, has announced legendary rock band Foreigner has hit the one billion spins mark, joining top artists like The Eagles, Bruno Mars, & Michael Bublé. This is a noteworthy achievement for Foreigner, who turns 40 this year.

Streaming and downloads continue to soar as Foreigners music is featured in programs like Orange Is The New Black, Primetime TV shows as The Late Show with Stephen Colbert" and The Tonight Show with Jimmy Fallon, among others.  Hot Blooded was featured in the Angry Birds movie and and Jack Blacks version of Juke Box Hero in Kung Fu Panda 3, thus introducing Foreigner to a whole new generation of fans.  I Want To Know What Love Is was also featured in the Summer hit, Bad Moms and Waiting For A Girl Like You was included in Netflixs Stranger Things.

Recently, Atlantic Records Chairman Craig Kallman presented Mick Jones with RIAA gold and platinum digital awards for six Foreigner songs.  These awards signify 500,000 and 1,000,000 downloads of Foreigner hits.  That is more individual awards than any other heritage rock band, and an illustration of Foreigners resonance in the digital era.

Upcoming, Foreigner will spend 2017 celebrating 40 years as one of rocks most popular and enduring acts with a new career-spanning compilation titled 40 that features 40 hits from 40 years. The band will also trek across the country with an extensive 40th Anniversary world tour. For more information on the tour, please visit livenation.com.